Peloton this week officially unveiled its new Bike+, bringing a variety of new features and changes compared to the original Peloton Bike. In conjunction with the Bike+ introduction, Peloton also dropped the price of the standard Bike, creating a tricky dilemma for current Peloton owners and new shoppers alike. Read on as we round up everything we know about the Peloton Bike vs Peloton Bike+.

For many people, the biggest difference between the Bike and the Bike+ is the pricing structure. The Bike+ comes at a $600 premium compared to the Bike, with the Bike going for $1,895 and the Bike+ going for $2,495. The prices differences in various markets can be seen below:

For the $600 premium, however, you get quite a few additional features and capabilities with the Bike+. Depending on how you plan to use your Peloton, these features could easily help justify the added expense. Here are some of the highlights.

The Peloton Bike+ features a slightly bigger screen at 23.8-inches, compared to the Bike’s 22-inch screen. The bigger difference here, however, is the design of the screen. The Bike+ screen supports swiveling so that you can rotate it to face away from the saddle for bootcamp classes. The Peloton Bike’s screen is fixed in place and does not support swiveling.

The standard Bike does not support Apple Watch GymKit integration because it does not feature the necessary NFC hardware. There are some third-party solutions for using your Apple Watch as your Peloton Bike heart rate monitor, but their reliability is often hit-or-miss.

The Peloton Bike+ also features an improved speaker system, which Peloton refers to as a “high-fidelity four-speaker sound system.” The speakers are located around the display so the face the rider, as opposed to the speakers on the Bike which face down and backwards.

Finally, the Peloton Bike+ features a new Auto-Follow resistance feature. This means that your Bike+ can automatically adjust its resistance level based on what the instructor of the class suggests. Unfortunately, this feature works only for on-demand classes, so if you primarily take live classes, this is a less useful feature.

Other odds and ends to consider:

Which Peloton Bike should you buy?

For most people, the original Peloton Bike should be perfect: it offers access to the entire Peloton library of classes and will receive support from Peloton for many years down the road. Everything you can do on the Bike+, you can do just nearly as easily on the Bike+, and you can save $600 in the process.

There are a few instances in which the $600 upgrade to the Peloton Bike+ might make sense. If you’re deep into the Apple ecosystem, the Apple Watch GymKit support is a notable feature. Furthermore, if you plan to take a lot of Peloton bootcamp classes, the swivel display is a great added functionality.

Something else to consider is that while the Bike+’s swivel display makes the bootcamp classes easier to view from off the bike, Peloton is not limiting the bootcamp classes to just Bike+ riders. This means that you can take these classes, led by Jess Sims, Cody Rigsby, and Robin Arzon, from the Bike without worry.

If you’re awaiting delivery of a Bike but would like to upgrade to the Bike+, Peloton says you can do so by reaching out to Member Support. If you took delivery of the Bike within 30 days of the Bike+ announcement on September 8, you should receive a refund of $350 + tax to your original form of payment.

Use referral code AYTT8Q to save $100 off Peloton accessories when you buy a Bike. 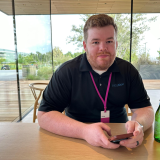 Rides a Peloton bike all over Waco, Texas.